This is All Your Fault…

Orlando, Dallas, Columbine, Aurora..the disgusting list that continues to go on and on into darkness, the killing of innocents and the social unrest that always follows such horrid incidents and do you know who is to blame for this?

Yes you, sitting there on your laptop, eating lunch while browsing on your mobile phone, all of you are to blame for these things, every single one of them.

Good, I also used a picture of a cat, just to be sure.

Now before you get out the torches and pitchforks, let me explain and like all good internet opinion piece fodder, we will start with a related anecdote from my own life.

Recently I was told by one of my closest and dearest friends that people that had met me in the past, in very small sample sizes, had less than nice things to say about me after the fact.

I was not rude, I am never mean and I generally love every stupid ape on this planet, even though at times we can collectively be as dumb as a GOP convention on holiday.

Now there is a pretty good chance that these people belonged to the LGBT community, a segment of society that has been through hell socially and that struggle despite improving still goes on to this day.

Now here were these people, part of that collective group that faces so much adversity just because their very nature of love differs from what society traditionally said it should be, judging me and putting me down based upon things that most likely were products of my own personal struggle from an abusive past.

That is where you come in.

You see, the reasons all of these events are out fault is because we all already know the solution in our heart of hearts.

You have already been told this before countless times by people you put on pedestals and made into the closest thing we have created on this planet to a god.

No here are three quotes, without accreditation to who said them because it is not the name but the message itself that counts:

“Holding on to anger is like grasping a hot coal with the intent of throwing it at someone else; you are the one who gets burned. ”

“If everyone demanded peace instead of another television set, then there’d be peace.”

“…You wanna make the world a better place, take a look at yourself and then make the change.”

So we have been told before, by the people you make into gods and prophets exactly what you are supposed to do in able to get past the chains that have bound Humanity since our species first found itself newly created and get on with making a better world, one of peace and light and one free of the darkness of the modern medieval times we are too caught up living in to see how barbaric, juvenile and stupid it actually is.

However, somewhere a cardigan or a caravan or whatever that vapid famous television family is actually called (I dunno, I only know one of them was married to Lamar Odom -?- and only know that because I am a basketball fan) is having a baby, getting divorce or wore a shocking outfit to a meaningless awards show.

I know, you day is full…but then you’re also just admitting that you are also full of it and we all know what ‘it’ your full of. 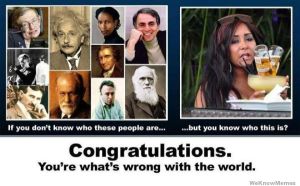 Now of course as Billy Joel once said we know you didn’t start the fire, it was always burning since the world’s been turning…sorry, got carried away there but the point is that although you may not have the time to become the next Gandhi or start a political revolution you do have the time to practice being a logical Human Being who won’t let the masses tell them how to feel or think.

In simpler terms and dropping the syllable count a bit, you could just stop being a judgmental douche bag and start to follow what you know is really right instead of just being obtuse.

There is also the fact that this method requires not one of the things that a ‘real world’ revolution would require such as guns, death, funding, sorrow, loss and social breakdown.

Don’t think that this makes it an easy battle either, because the construct we are all living in has made those negative and non progressive beliefs into a meme for the masses, blasting it out across all media:

You turn on the TV there is a black criminal in a cop show, Twitter and Tumblr are almost like the twenty-first century CNN with no filter, spewing out hate and indoctrinating the youth into false ideology no better than any terrorist group, our pop music has become about how much material wealth, power and beauty you have.

(It also seems it has a lot to do with the shaking of various body parts, especially the ‘booty,’ which reminds me of Jell-O, but that’s not really the point.) 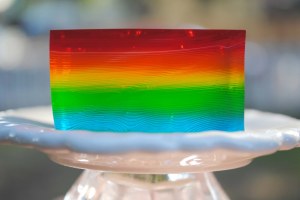 Image of Jell-O, image of ‘booty’ not available.

Point is stop being so fucking hateful, stop looking at your brothers and sisters of all colors and backgrounds like they just arrived from the goddamn planet Bebblebrox (Home of the galaxy’s largest discount superstore!) and treat them with the same amount of love and respect as you show your kids, your significant other, your cat…your pillow stuffed with authentic Elvis Presley chest hair??

Just stop it and stop making this world a cesspool of hatred and unrest, take the time to see that everyone has a weight on them, most of which are caused by the same source, that is the society we live in and the incredible demands it put on us to have everything ‘just right.’

There is no ‘just right’ and never will be this universe is chaotic by her very beatiful nature. But damn you she does have an order and it goes smoothly if you just drop your defenses and your hatred and your greed.

One day your prince will NOT come, find the fucking frog, kiss the bastard and stop drinking the Kool-Aid.

I am far from perfect and getting my mind to a place where I was able to filter out the static around me from all sides was damn hard.

I lived for years in hatred.

I hated everything and everyone and I paid dearly for it.

Hatred is like mental cancer and like that sad physical disease it is very hard to cure as well. It will drain you and make you it’s slave, to where even your own thoughts will betray your true soul beneath.

Anger and hatred really are the path to the dark side, it’s not just for Jedi’s anymore (Besides only a Sith Lord deals in absolutes or so I have heard).

Sitting here in real time writing this I feel drained, like I just ran a marathon mentally because I just spit out every damn idealistic crusade I ever wanted to go on, if my Uncle Owen allowed it.

(Yeah, yeah, enough of the Star Wars references..hey it works for Kevin Smith and Seth MacFarlane, so bite me.)

So here is one more instance of the right lesson being taught, here is one more example of how to live a life that cannot be bought, and all it takes is change in thought, so do ye say yay or have a I just wasted time all for naught?

If anyone sources the quotes (no cheating..yeah OK lol), I will actually send you a mysterious No Prize via mail like Marvel Comics used to do back in the day, just guess in the comments.

This entry was posted on Friday, July 8th, 2016 at 9:58 PM and is filed under Random Musings. You can follow any responses to this entry through the RSS 2.0 feed. You can leave a response, or trackback from your own site.

4 Responses to This is All Your Fault…