I have written for the Dolphin Talk Newspaper out of Seadrift, Texas since 2012. These are the articles I have written in this time as it went from a bi-weekly publication to a monthly. This article is from the twenty-third of February 2012 and can also be found here.

Have you ever checked your email and found a letter from a poor refugee who is suffering in another country and needs assistance? Ever received a letter stating that an American soldier serving in the Middle East has a trunk stuffed with cash from a terrorist compound and he needs your help to get it into the United States? Or how about a letter stating that you have won the United Kingdom Lottery drawing, even though you never entered?

Chances are if you have a public email, such as a Gmail or Hotmail account, that the answer is most likely yes. These letters are called 419 scams, named after the part of Nigerian code that governs such criminal activity in that country and they have been around for over twenty years.

When the Nigerian economy started to decline in Africa in the middle of the eighties, it gave some Nigerian university students the idea to scam shady businessmen in the West, offering oil and the riches of deposed government officials. The idea was to tempt the target with riches and then get them to pay a fee or to meet certain requirements, always concerning payment of some sort, to get their share of the funds.

Although the first letters were by post, the scam artists would soon move on to use fax, Telex and later email services to spread their toxic messages around the world.

Today 419, or advance fee fraud, is almost as diverse as the world we live in.

There could be a scam artist in Nigerian internet cafe right now who has a picture of that house you have up for sale making the rounds on Craig’s List, telling unwitting renters or buyers that your home is available for rent or sale at a very low price. That is as long as they can accept not seeing the interior of the property until the scammer sends the keys in the mail…after they get a down payment of course. Or a scam artist could be chatting to you via internet services such as Yahoo!, claiming to be a beautiful Russian woman who has finally found her true love , if only she could pay for her sick mother’s medicine or afford to pay for a passport or visa to come and visit you in the states. 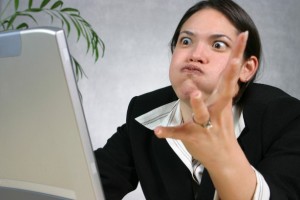 “No, I do not want to see pics of your appendex scar!”

If it all seems a bit too ridiculous that an educated or logical person would ever fall for these scams, then you might want to sit down and read the book 419 Scam: Exploits of the Nigerian Con Man, by author Charles Tive. According to the book, the estimated losses to 419 and other forms of advance fee fraud were seven billion dollars between 1985 and 2006, when the book was published.

Doctors, lawyers and people from every walk of life have fallen victim to these scams, sometimes caught in a web of denial that each payment they make to get their big payday is the last fee or processing charge, only to find themselves with empty bank accounts and a large dose of shame that they could have been so easily taken. Some have even been kidnapped or murdered after traveling to Lagos, Nigeria or even Amsterdam, the final stop on a journey that would be their last.

So now that we have established that 419 and other related scams are indeed real and can be very costly or dangerous to you or a loved one, how can you ensure that you never get ‘bit’ by these con men?

• Never open an email from an untrusted source; if your curiosity does get the better of you, never reply, even if the message asks you to ‘unsubscribe’ or ‘cancel’ from any future correspondence.

• The age-old saying remains true: If it seems too good to be true, it most likely is. No one is going to send you millions just for cashing a check and no Lottery drawing in the world charges a fee for you to win a prize, especially one you never entered.

• Never send any money to an unknown or untrusted source via Western Union or Money Gram services. This is the scammer’s preferred method of payment as it is untraceable and once it is gone it is gone for good.

• Never give out any of your personal data, such as name, telephone number or bank account information over the phone or the internet. Likewise, never agree to send copies of your ID, Driver’s License or passport to someone you do not know. These could be used to fool someone else involved in a scam or even worse, to steal your identity.

• If your bank or credit card company (or anyone else for that matter) calls you or sends you an email and the conversation seems odd or something seems wrong, hang up or do not respond. Most companies and banks will never ask you for passwords, pin numbers or other personal data over the phone or via email unsolicited. If it seems suspicious, contact your bank or other institution directly from a number or URL you trust and ask them if they have called or contacted you. It might save you thousands of dollars and if they are really contacting you the bank will be more then happy to accommodate your questions regarding the validity of the conversation.

• Never browse, click links or ‘sign in’ to any website that does not look quite right. Even if looks like the Pay Pal or a credit card site at first glance, if you followed it from a link in an email or an untrusted source on the web it may just be part of a scam. If you suspect you are visiting a faked website, try to save the URL in the address bar and send it into the legitimate company in question so they can have it shut down.

• Also never trust any unknown banking or financial site, especially in other country’s. This may also be fraudulent sites used to dupe scam victims into thinking the scammer’s stories are legit. Bottom line: If you did not initiate the contact with the website through a trusted source, leave the site and never communicate any sort of personal data on the site, it could be used against you.

But the best protection you can give yourself is your own common sense. These criminals try to prey on the elderly, the poor and lonely individuals. Remind your self that on the internet and over the phone anybody can claim to be anything and anyone. If your gut is telling you that something just is not right about that email, chat message or phone call, trust your feelings and look into it.

Finally, if you do find a potential scam email in your inbox or you come across a suspicious website or text, you can report it to a site such as the one below. This may prevent someone else from falling victim to these criminals: http://www.scamwarners.com/

Remember, the internet is one of the last untamed frontiers in the world, and like the wild west of days gone by, where everybody’s out for your dollar including the new-fangled snake oil salesmen of the digital age.
–Thomas Spychalski

This entry was posted on Wednesday, June 12th, 2019 at 9:13 AM and is filed under Dolphin Talk Newspaper, Random Musings. You can follow any responses to this entry through the RSS 2.0 feed. You can leave a response, or trackback from your own site.