Year Of The Dolphin

It has been one year since I started to write my Fish Out of Water column for the Dolphin Talk Paper out of Seadrift, Texas.

So for the upcoming column I wrote about how it felt to be kind of thrown into the fire of reporting right around this time last year.

Here is a little preview of the column:

“It was a cloudy day that threatened to drop rain out of the sky, and little drops could be seen on the folding chairs lined up in the middle of Main Street, which was blocked off to vehicle traffic for the dedication.

I had spent the day before at Wal-Mart of all places, trying desperately to find a shirt that looked professional. I was not out of my depth, but I was definitely about to take on another aspect of the craft of writing, head on.

As I approached the building, I saw the little white cat decoration on the front of the Johnstone Building, which I took as a good omen as for a guy I am a total cat nut(seriously, I have statues).” 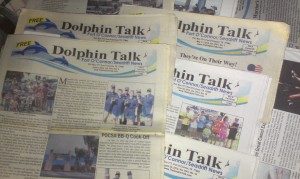 “Recently I was talking to a friend I have known for years who is a visual artist. We were chatting about the kind of things people probably think artsy people talk about when eventually we touched on how some people can turn their talent into power trips. I quickly related this to how I felt about reporting for the paper. Although it was fun to be able to walk up to people and interview them and arrange and take photos to appear alongside the text, it was never a power trip to be able to do so. Rather it was one of the best feelings in the universe, to be doing what you loved and being respected for it to boot. To a man who at times in his past thought he would never be able to get anything out there due to a past of troubles, it was like a dream.

So I enjoyed every little problem, every little odd quote that you had to fit in to have a news piece but you had no idea how, every deadline looming (tomorrow) and every opportunity to make each article and column my own, to try and find a voice that would hopefully hold reader’s interest, as well as entertain and inform.”

I will try and remember to place a URL in this spot to the rest of the column once it is published.